The Association of Ukrainian Cities (AUC) study “Gender Policy at the Local Level” presents the findings of a survey of villages, towns and city councils of AUC member municipalities on gender policy conducted from April – May 2020.

The survey presents findings, disaggregated by sex, from 839 local governments on mayors, secretaries and members of local councils of AUC member municipalities, as well as information about the number of female boards, gender profiles and implementation of gender responsive budgeting in communities, as well as signatories of the European Charter for Equality of Women and Men in Local Life.  This research highlights the status of the implementation of gender policy at the local level and could be used as a baseline to compare changes taking place in Ukraine following the local elections of October 2020.

Read the study in English or Ukrainian 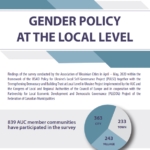 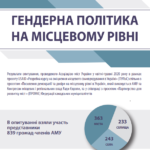 Presentation of the survey on 2 October 2020 (English)

The study was produced within the framework of the USAID Policy for Ukraine’s Local Self-Governance Project (PULSE) together with the Strengthening Democracy and Building Trust at Local Level in Ukraine Project implemented by the AUC and the Congress of Local and Regional Authorities of the Council of Europe and in cooperation with the Partnership for Local Economic Development and Democratic Governance Project (PLEDDG) implemented by the Federation of Canadian Municipalities and financed by Global Affairs Canada.